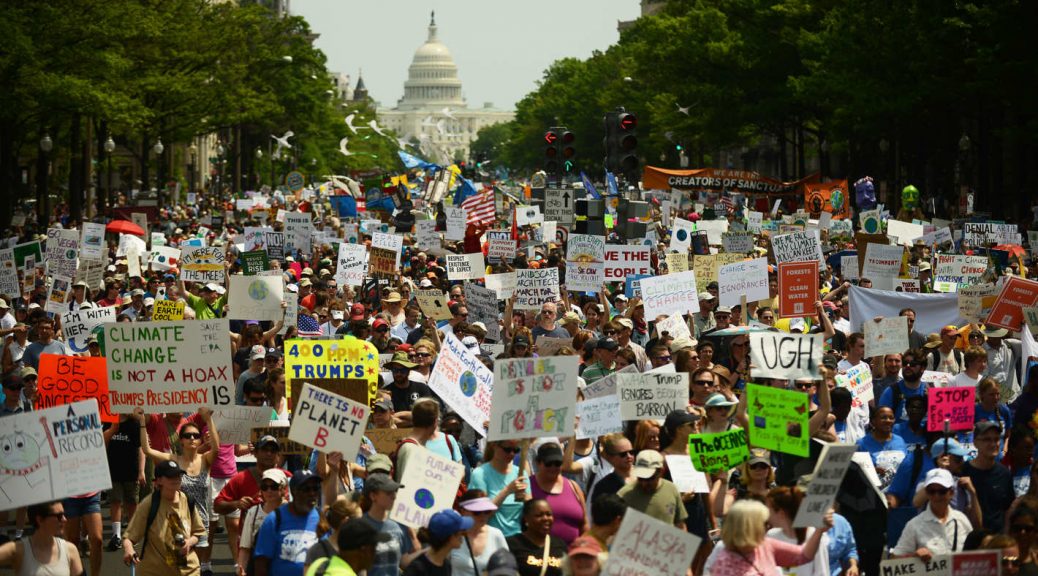 This winter, I finished conducting interviews with climate movement participants for a project I call “Green Identities”. I’m interested in understanding how individuals come to be involved in environmentalism from their own perspectives. What is it that leads them to participate? How do their life experiences and social contexts matter?

Dr. Dana Fisher and her research team have surveyed protesters at many large-scale protest events, including the People’s Climate March in New York in 2014. The March drew roughly 500,000 participants and is the largest climate event in history. From hundreds of surveyed participants, I was able to conduct follow-up interviews with 40 individuals. I sampled 20 first-time and 20 repeat protesters, to see if there were any differences between experienced activists and those who were not already engaged in protest.

I was grateful to be able to practice qualitative, open-ended interviewing techniques and truly enjoyed talking with these participants about their experiences and perspectives. Some of the conversations I had have stuck with me, and were particularly timely as I was completing these interviews during the election and inauguration of Donald Trump.

These conversations were especially interesting as the Women’s March and other protest events have been occurring in DC and across the country. I thought a lot about these respondents’ perspectives on and experiences with the Climate March when thinking about participation in future protests. Many described an overwhelmingly positive experience and a sense of amazement and excitement when describing the march. As Julia shared:

“It was the opportunity to have people come together and have our voices be heard and be seen. And I saw it as, you know, kind of a defining moment in my life and if I didn’t go I would probably regret it for a long time”.

“I was really happy that they had actually more people than they thought they were going to have. I thought that that was amazing and wonderful and…I felt a real sense of accomplishment for having been a part of something”.

Others were disappointed in the outcome or organization of the People’s Climate March, like Stephanie:

“Personally… I was really disappointed in the effects that I saw of the march…Now, in retrospect I think that the march was an example of holding space…That was a good feat. And that in the future I hope [we] vastly increase the numbers if it’s gonna make an impression”.

For many, clarity of organization and goals was extremely influential in shaping their experience. They also expressed the importance of making sure that there was clear follow-up action. Katie said:

“I was a little disappointed at the end that there was kind of nothing more to do. It just seemed like there was all this energy and kind of enthusiasm around this issue and so it would have been great if there had been… some kind of assembly or something at the end…where people could really come together and generate ideas for what we wanted to do to organize around this”.

I hope that organizers and activists can work to capitalize on the energy and commitment of citizens and work to complement and encourage instead of compete with each other. Coalition building seems to be increasingly important, and recent protest events have drawn intersectional crowds motivated by a range of issues. Organizers should continue this trend while also working to sustain activism and engage participants in future action to maintain their sense of efficacy (Gupta 2009).

Two papers are currently in progress using data from these interviews: one exploring moral shocks as a tool for mobilization and the other examining the role of childhood experiences in the development of environmental identities. I look forward to exploring these data and am grateful to these marchers for sharing their time with me.

* Pseudonyms are used to protect the identities of respondents. For clarity, words and phrases such as “um,” “like,” “I mean,” and “you know” were deleted from quotes when they did not provide additional meaning or information.

** Thank you to the University of Maryland College of Behavioral and Social Sciences Dean’s Research Initiative for funding this research.