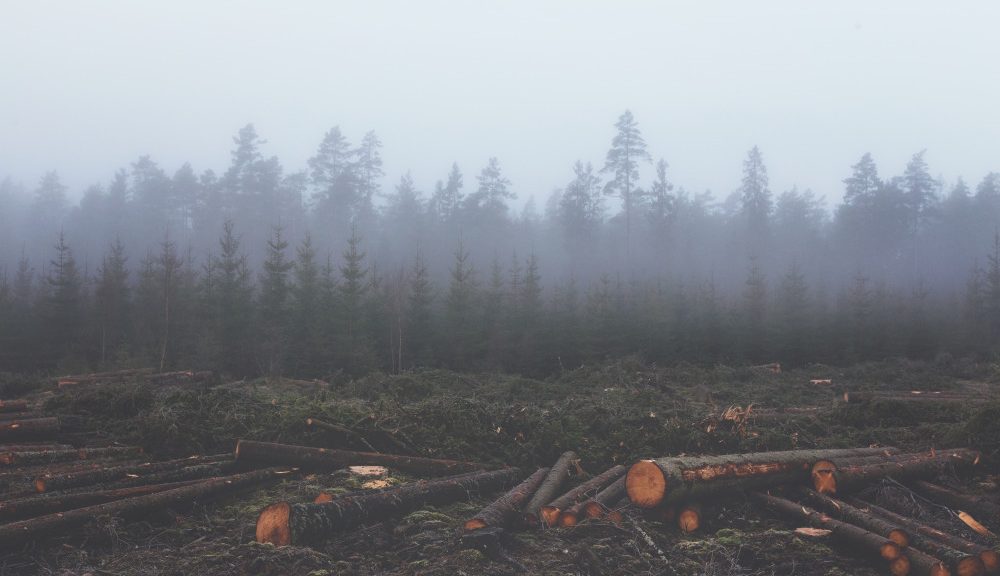 In a 2008 piece, Dunlap and York tested the postmaterialist explanation using results from 3 waves of the World Values Survey, correlating GDP per capita with measures of environmental concern.

For context, the World Values Survey is conducted through face-to-face interviews conducted by researchers in dozens of countries. Specific procedures vary but country, but each country has a sample size of at least 1000. Dunlap and York correlated national mean answers to environmental questions with GDP per capita from the World Bank. They also created additive indices for three categories of environmental variables: willingness to make economic sacrifices, green consumerism, and activism.

These survey questions are as follows: 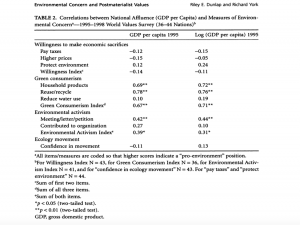 When I attempted to replicate Dunlap and York’s findings, I was very successful despite being unable to obtain data for two of the countries that they had included (Ghana and Brazil). My results were almost exactly the same, despite that complication (Table 2).

I, like the authors, found no statistically significant correlation between GDP per capita and any of the willingness to make economic sacrifices measures, including paying taxes, paying higher prices, prioritizing protecting the environment over economic growth, and the willingness index. In fact, several of these coefficients are negative. There are statistically significant positive correlations between GDP per capita and several of the green consumerism measures: household products, reusing and recycling, and green consumerism index. Unlike Dunlap and York, however, I did not find a statistically significant correlation between the activism index and the logarithm of GDP per capita. Overall, I would draw the same conclusions as the authors from the results of my replication. There are not consistent correlations between affluence and environmental concern and for the potentially strongest measures of concern, willingness to make economic sacrifices measures (Dunlap & York 2008), the coefficients are often negative.

I wanted to extend the project by comparing residents of urban and rural areas, with the idea that they might have different environmental perspectives, so I removed the 12 countries without those data (Table 3). However, I found that removing those countries and running the same analyses changes results. I then found that adding the Philippines back to the analysis brings the results close to the original replication (Table 4).

Seeing the results change significantly based on changes to the included countries, this project then shifted to an exploration of the consequences of sampling choices.

I examined the data for the twelve excluded countries to explore the reasons for the differences. To visualize how certain countries could affect results, the scatterplots below show the distribution of the countries’ average scores on a selection of variables: reducing water use (Figure 2), contributing to organizations (Figure 3), and the activism index (Figure 4). Many things stand out from these distributions. First, we see a wide distribution of scores among countries with the lowest GDPs per capita. This weakens the argument that GDP per capita is a valid predictor of environmental concern, as concern varies widely within similar GDP per capita levels. There are also several outliers, countries with very high scores and very low GDP per capita, that could alter the results. For example, it appears that the Philippines and Nigeria would both have strong effects on the results of these analyses, particularly with regard to the activism measures. With this in mind, what conclusions can we draw about the relationship between country-level wealth and country-level environmental concern?

Figure 2: Distribution of Willingness to Reduce Water Use 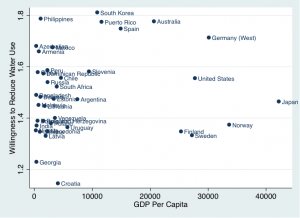 Note: Reduce water use variable ranges from 1 to 2. 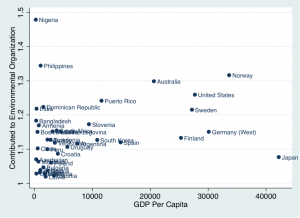 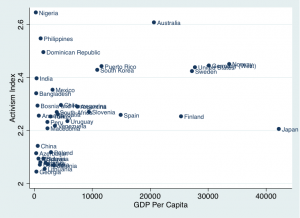 The central point here is that careful sampling is important, even when working at the level of the country. These results also show that while correlations of activism and green consumerism measures change with different samples, correlation of willingness to make economic sacrifices is not statistically significant in any sample. In fact, these coefficients are often negative. This is interesting and provides further evidence that not only is environmentalism not necessarily a luxury afforded to the rich or residents of wealthy nations, but in fact those who are more likely to be able to sacrifice for environmental protection are less likely to be willing to do it. Therefore, context and culture are important (Lee et al. 2015, Wolf & Moser 2011). While this and some of the other particular relationships between environmental measures and GDP are interesting and warrant future examination, this project raises the question: is it useful to make generalizations and predictions about and across countries? And how do we understand the relationship between wealth and environmentalism, at both the level of the individual and the level of the nation?

Dunlap, Riley E. and Richard York. 2008. “The Globalization of Environmental Concern and the Limits of the Post-Materialist Explanation: Evidence from Four Cross-National Surveys.” Sociological Quarterly 49:529-563.